First a short clip of Byron doing a Chewbacca impression after receiving his first squeaky toy... Nothing to do with the subject of this blog article but oh so cute!

A definition of 'self-carriage' would be the horse or dog 'is able to move with you, without pressure from the reins or the lead'. So for a horse, the feeling down the reins is very light or even loose. The horse is however balanced and NOT 'on the forehand'. For a dog, the feeling in the lead is loose, with no pressure on the lead as they walk beside you (if that is the position you have trained). In dog training parlance this is usually referred to as 'loose lead walking' or similar.

To have a horse or dog in 'self-carriage' is bliss, both for the animal and for you. If you have never experienced this feeling then you are missing something truly wonderful.

Imagine how much nicer it is for the animal to not have constant pressure on their mouth or neck. For you, imagine having no pressure on your hands and arms.

Currently, I am working on this with Byron (our Lakeland Terrier pup) and it has reminded me about a particular horse that I owned (Leroy), and an important lesson that I learned, many years ago, before I knew much about 'conditioned responses' etc.

I bought Leroy just four days after arriving in Australia to live, back in the early 90s. A more sensible person would have waited a while, unpacked their stuff, etc. but that is not me.

Leroy turned out to be a fabulous horse. The fact that he was a strong 'puller' when I bought him did not bother me that much as I simply saw this as a challenge to sort out. I did sort it out but not in the way I imagined I would.

We would canter back, with no pressure on the headcollar 'reins' (I tied them so that I had a pair of reins). He had the most wonderful canter I have ever had on a horse. Light and balanced, it was simply divine.

I would then tack him up and go out for a ride where he would immediately start pulling. I would battle with him and sometimes manage to get him 'on the bit'. But I was not getting anywhere fast. One day the penny dropped (with me) and I started to ride him out in a halter. After that our rides were just wonderful.

Together we explored many miles of the wonderful pine forests around Canberra (sadly most of these forests were burned out in the large Canberra forest fires a few years later). The freedom to have so much space to ride in was wildly exciting for me.

Later I was able to transition back to using a bit when I took part in group rides with him (at that time bitless riding was not 'a thing' and bits were expected). But he was light and no longer pulled because he (and more importantly I) had learned about self-carriage.

Currently, I am using a harness and a collar to train Byron to walk in self-carriage. Because I do not want him to practice pulling on the collar (for the sake of his neck of course but also because I want him to be light on the lead in the future) I have a double-ended training lead that clips to both his harness at one end and his collar at the other. 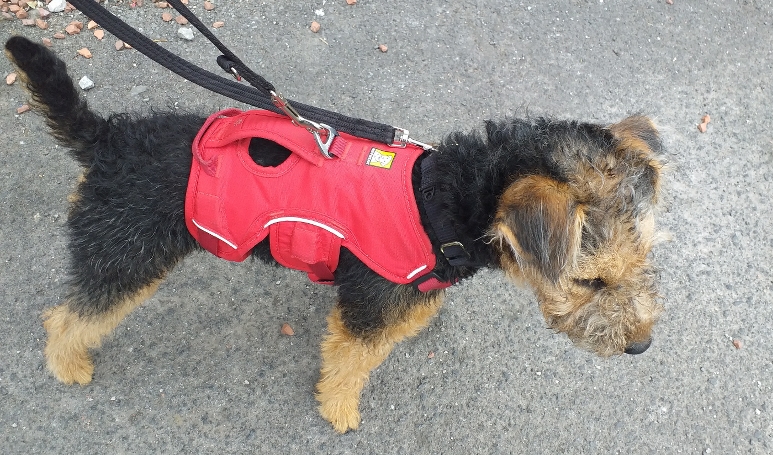 Currently, I am using a harness and a collar to train Byron to walk in self-carriage.

By the way, I use a breakaway collar (for safety), this collar opens if a dog gets caught up in something in the house say, but does not break away when you fasten on the lead for a walk.

When we first set off on a walk he is excited to be out and his attention span is still very short. I work on getting his attention using reward-based training (rewarding him for slowing down and looking at me) but inevitably he sometimes puts pressure on the harness. When he eventually settles down I switch to leading him on the collar, once I know he will stay in self-carriage, this way he is never learning to put pressure on the collar.

In the future, I will have the option of using a collar or a harness because both have different advantages and disadvantages. He will only wear a collar without a harness when I know he will reliably stay in self-carriage.

They, of course, do not know what is the right or wrong behaviour as they do not know your agenda. It is up to you to set things up so that they carry out the behaviours you are aiming to train and reward them (reinforce them) for carrying out those behaviours.

Look out for the next pupdate.