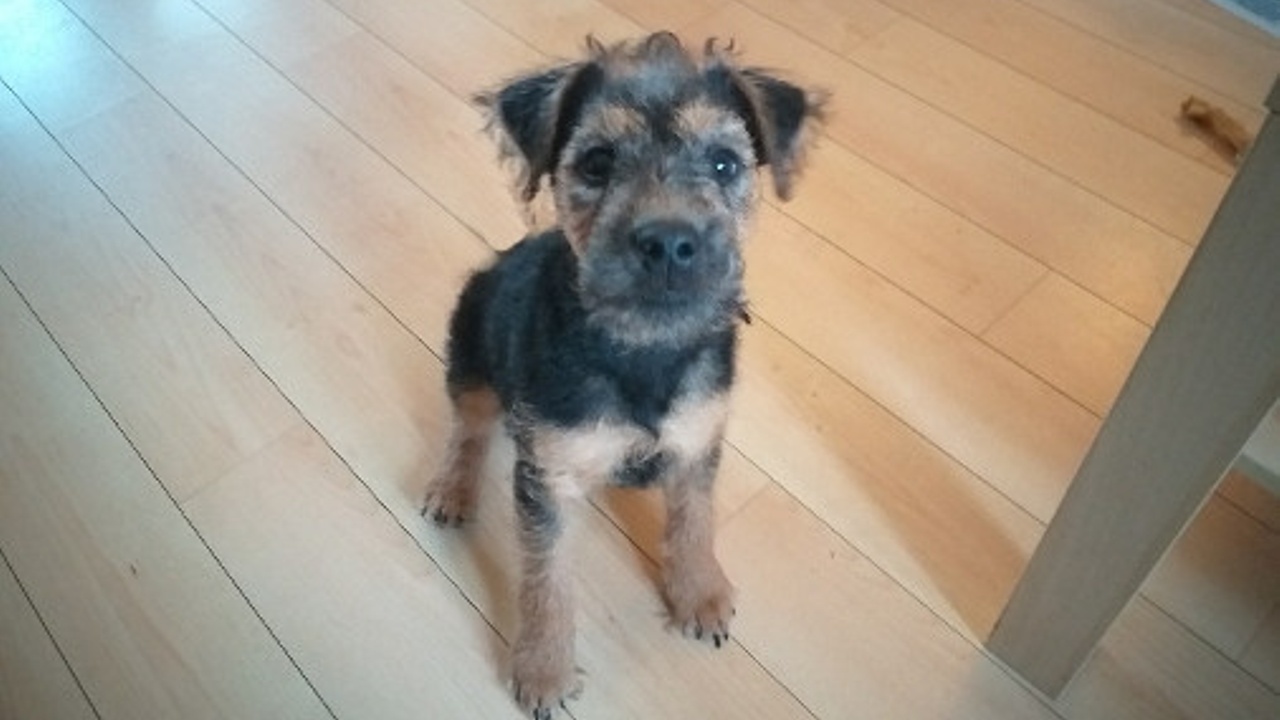 So, day 8 after welcoming Bryon. We already adore him. For him, life consists of eat, play, sleep repeat. Most of the time when he is asleep it is great because you can get on with all the things that you cannot get on with when he is awake, but sometimes when he is asleep you just want him to wake up so you can play with him again because he is so damn cute.

At this stage in his life (8-12 weeks) socialisation is extremely important. Not so much with other dogs directly as with various sights, sounds and smells. Which is a bit difficult as we are now in lockdown 3 in the UK. But we are still allowed to walk out once a day so we take Byron out in his puppy rucksack with Jessie (my mother’s dog) walking beside. As well as being too young to walk much at all he is undergoing vaccinations so cannot go on the ground in areas that other dogs have been. 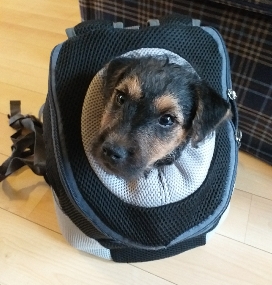 Byron in his puppy rucksack.

So far he has been exposed to the sight and smell of lots of other dogs in the local park, traffic as we walk up the road to the park, swans, ducks and other birds on or near the canal (the Leeds – Liverpool canal), canal barges and their diesel smell and engine noises, building site noises as we pass a building site. And no doubt lots of other sights sounds and smells that we are not even aware of but he is taking in and filing in his little brain.

Then, of course, there is the TV, like so many other in lockdown we are watching more than we normally would, and sometimes he watches with us, especially if it is David Attenborough or the like, but also he is taking in the various sounds even when he is not watching.

I plan to habituate him to the sound of thunderstorms and fireworks by using the TV before his 12 week window of opportunity is up (a dog can still learn to accept new or scary sights and sounds after this but the more they learn, and are habituated to, before 12 weeks the better).

Habituation is the posh way of saying 'get used to'. It is invaluable for the safety of all animals that live in captivity such as horses and dogs so that they can accept the sights and sounds that we humans create. It is best done by very gradually exposing the animal to what they would normally be afraid of, at a level they do not get stressed, in fact where they hardly even notice. Then the stimulus can be very gradually increased, all the time making sure the animal is not showing signs of stress. Not to be confused with 'flooding' where the animal is restrained and then exposed to something scary until they do not attempt to run away.

We have started some training basics so he can do 'sit' and 'off'. Off is the cue to leave what he is currently holding in his mouth. House training is of course also underway, sometimes he is brilliant, but like most males, sometimes he misses.

I bought a couple of really good books by Steve Mann - Easy Peasy Puppy Squeezy and Easy Peasy Doggie Squeezy. Highly recommended by many (modern) dog behaviourists so check them out if you are interested.